Within the 57th Ordinary General Assembly of the Unión nacional de Avicultores, held on April 11 in Mexico City, Juan Manuel Gutiérrez Martín, assumed the presidency of the agency and will head the Directing Council of the UNA during the period  2019 to 2022.

Before the majority of poultry farmers in the country, the new president of UNA said that “over the years I have had the opportunity to observe how the poultry indsutry has gradually transformed in the search to be better: more modern, more innovative and moreefficent, to the extent that its growth and commitment has allowed it to occupy a trascendent place in the development of our beloved Mexico”, he said.

“Trascending, is the the key Word!”, continued Gutiérrez Martín, who added that this trascendence has to be reflected in many aspects:

He also said that for a long time, the poultry industry has been considered a strategic sector and today we can endorse, because as an activity they have notonly focused on porducing food for the benefit of consumers, but also, poultry farming has been an engine of economic development in the áreas where it is installed, where áreas where few sectrors invest are privileged, is highly generating employment, wealth and roots, considerations taht together lead to a clear rural development.

During his speech, the president of poultry farmers, said that they have proved to be in favor of promoting international trade, but have also reiterated that as country, fair and correct practices should be promoted  that allow healthy competition between countries.

What we are sure and confident of, is that base don the sensivity shown by the authorithies of the Government of president Andrés Manuel López Obrador, it will allow us to compete in the same circumstances in the national and international market, all those who in this let’s participate”, he said.

Similarly, Juan Manuel Gutiérrez said that poultry farming is the livestock activity that demands the highest wolume of feed grains in Mexico.

“We are talking about around 16 million tons annually. This figure is important and should alert us, especially when we are analyze that approximately 60% of that volumen is imported every year to our country, generating great wealth effctively, but outside of Mexico

With that reference, we will have to analyze the possibility of boosting the production of yellow corn, with the objective of implementing a program to replace grain imports”, he added.

He insisted thet the Government and poultry industry are facing the great opportunity to lay the foundations to develop a Natioamal Strategic Plan for poultry with a visión to the year 2030, capable of achieving an impressive growth in activity, which triggers investments and development in áreas priorities where few sectors are interested to invest.

In that sense, Gutiérrez Martín announced the 4 guiding axes that will allow him to develo phis ation plan for the next three years.

1.Strategy for health: which we will promote a new strategy that allows the advancement of health status of the different áreas that still suffer the effect of avian deseases; We will promote the consolidation of the Fondo de Aseguramiento Avícola,  which will be the best instrument to meet health contingencies; We will promote the recognition of free states and free compartments and work hand in hand with the health authority so that the provisions to avoid the dispersión of health risks are respected.

2. Strategy to balance the trade balance: Today, Mexican poultry farming is so competitive that in eggs we are almost self-sufficient, and inpoultry, we are seeing that through unfair trade practices and unilateral trade opening decisions, countries can export to Mexico. Therefore, we will seek to minimize imports through the promotion of national production, so we will créate a succesful model to export and promote the consumption of poultry and egg.

Particularly, with the Legislative POwer, we will be sensitizing them about the convenience for Mexico, of updating laws that have been  exceded to national reality, an example of this is the Ley de Fondos de Aseguramiento Agropecuario y Rural, which by an irrational clause does not allow foreign investment in Mexican companies. Pests and diseases taht affect the agri-food sector do not respect political or geographical boundaries.

4. Influencing Public Policies: we will implementa n action plan that allows us to identify the opportunities and risks that different government actions may entail. In this way, the Unión Nacional de Avicultores, under my representation, will promote congruence and convergence between comercial policy and promotion policy before the different authorities, theyare completely different. We do not conceive more generation of wealth and benefits for our sector and therefore our country, if this condition is not carried out.

He announced that he will promote the creation of a Poultry Foundation in favor of combating malnutrition in all those people who because of their economic condition do not have easy Access to these wonderful products of high nutritional value that we manufacture.

Juan Manuel Gutiérrez took the opportunity to recognize the work done by César Quesada Macías during his three years (2016-2019), at the head of the UNA.

Finally, he thaanked the support of all the poultry farmers for supporting his work project, and in a very special way, he thanked his family for all the support and understanding they have offered to attend this important commitment to he industry.

For his part, César Quesada Macías, outgoing president of the Unión Nacional de Avicultores, said during his message that after three years another stage of the institutional life of the UNA is concluded. “One more stage in which we live expiriences that strengthened us as an organitation, as people and as entrepreneurs”, he said.

He explain that leading an organitation as important as UNA was a real challenge. “A challenge that translates into loyalty, service and effort of those who participate enthusiasthically in this noble activity such as poultry farming”, he added. 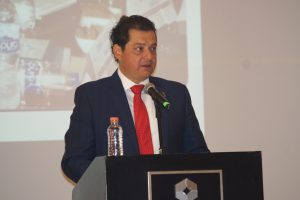 César Quesada, who served as president of the UNA from 2016 to 2019, said that during these three years, they devoted time and effort to the management of multiple issues that required full attention as a Board Directors.

In that sense, he continued “poultry health has been one of the pillar son which we have supported our management. We know that keeping our flocks healthy is a priority, not only for our businesses, but for the country itself”, he said.

During his speech, Quesada Macías highlighted the management for the creation of the Fondo Nacional de Aseguramiento Avícola, which was formally constituted on October 8, 2018, “This fund composed of poultry farmers from various states of the Mexican Republic, aims to provide protection, through self-insurance, which enables cost reduction by avoiding intermediaries.

Thus, this will addess the crises in flocks caused by diseases, by applying efficient control methods and guranteeing the investments of poultry farmers through the compensation of economic losses suffered by poultry farmers”, he explained.

The former president of the UNA, also referred to yhe issue of insecurity that the poultry industry is going through and said that robberies in trucks that transport eggs or chicken are increasingly numerous, generating economic losses to the different members of the Supply chain and the production companies themselves.

Facing such situation, he explained that the UNA was given the task of establishing contact with the high command of the Policía Federal, in order toestablish an action plan to migrate this social phenomenon.

César Quesada Macías ended by thanking his family for all the support they offered unconditionally. As well as the members of the Board of Directors and the Executive Committee, who gave him the opportunity and the confidence to drive the destinations of the UNA during this time.

Finally, he thanked the staff of the Unión Nacional de Avicultores, “who shared his expiriences, work and effort for the benefit of all poultry farmers”, he concluded.

The Undersecretary of Agriculture recognizes the role of poultry farming in innovation and evolution.

The Government of Mexico has a great commitment to be on the side of the Mexican producers and obviously poultry farmers, said the Undersecretary of Agriculture, Miguel García Winder, during his speech at the 57th Ordinary General Assembly of the UNA.

The public worker highlighted the degree of innovation and evolution of the poultry industry by becoming tha main supplier of animal protein for the Mexican population.

García Winder spoke of the public policy that the government of President López Obreador is implementing, has a very clear visión that seeks to improve the living conditions of the entire population without exceptions, seeking to reduce the differences that have been generated over the years and that nobody was interested in attending them, so that the growth of the country is much more democratic.

In his message, the undersecretary said he referred to three factors that will allow for a much mordemocratic growth:

Finally, he said that these factors will be implemented in two tasks: